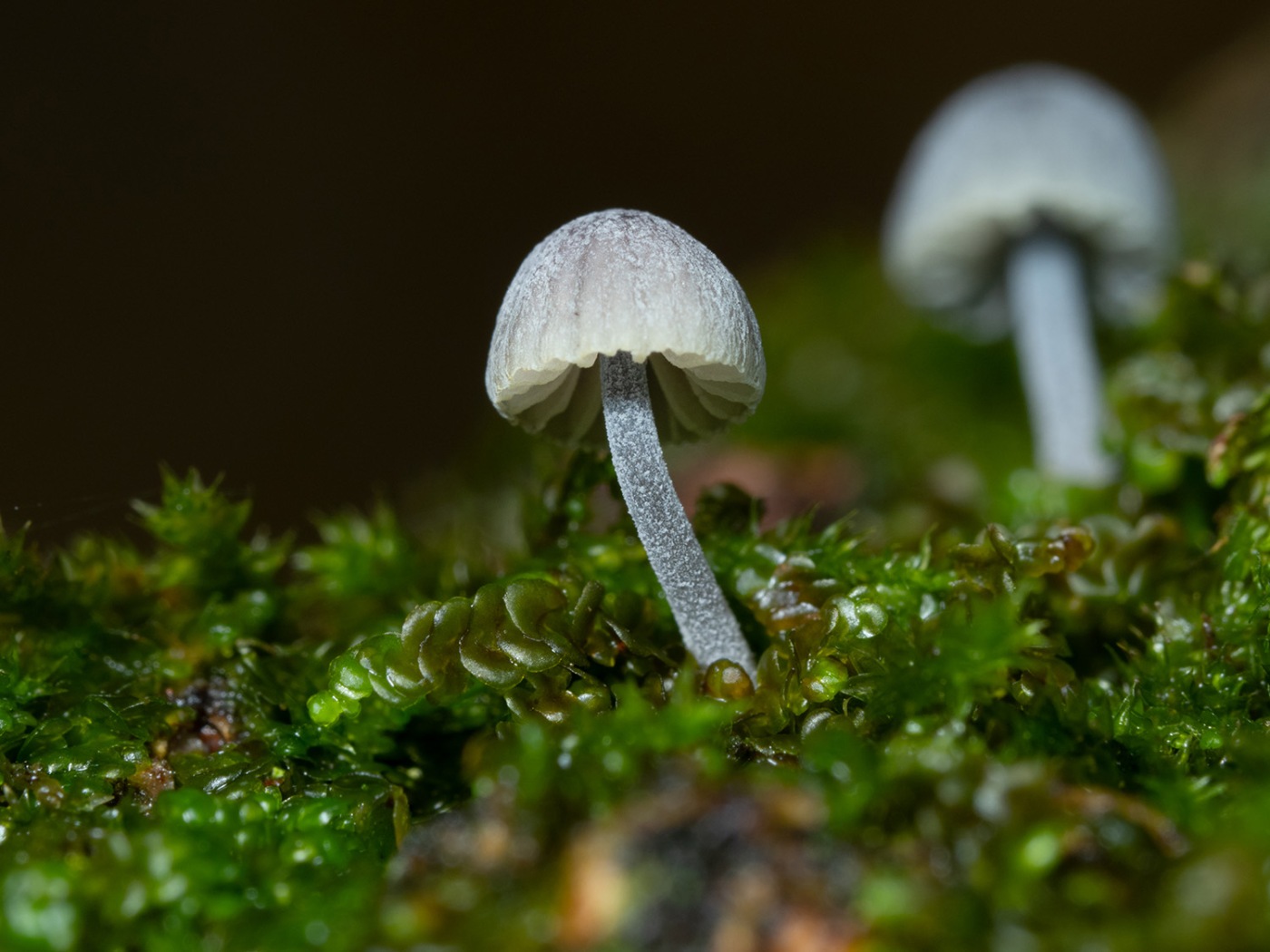 I was looking for fungi recently in the park, but because it’s now getting late in the fungi season, I wasn’t finding anything that interesting. I was about to head home when the moss on a nearby oak tree caught my attention.

As I was marvelling at how an oak tree is more than just a tree – it is its own mini ecosystem, with mosses, lichens, insects and birds all dependent on these trees for a home and places to feed – a tiny speck of colour caught my eye. There was something that was a bluish-grey contrasting with the vibrant green of the moss. On closer inspection, I had discovered a tiny mushroom growing on the moss of this oak. When I say tiny, I am not exaggerating. This mushroom was no taller than 7mm, with a cap measuring 3 to 4mm in diameter. Its stem was probably 1mm in diameter.

Mycena pseudocorticola photographed in the park by Simon Knight

As is often the case with wildlife, when you stand still you tend to notice more going on around you, and I soon started to spot more of these tiny mushrooms growing on the tree. My wide-angle lens was substituted for a macro lens and I started to compose some shots. I wanted reference images showing as much detail as possible – the gills for example – and I also wanted to try to create something a bit more ‘arty’, to try and give a sense of scale, whilst keeping the composition as simple as possible.

The tiny mushroom was Mycena pseudocorticola and the specimens on the tree varied from grey to the bluish-grey of the first one that caught my eye.

To prove my earlier statement about seeing more when you stand still, I soon had some company. A robin appeared on the next closest tree, only around fifteen feet from me. He/she was definitely watching me, and I couldn’t help but think it was waiting for me to offer it some food! Next on the scene was one of my favourite birds, the ever-active wren. Then a dozen or so long-tailed tits flew through above, stopping on the way to feed off of the branches. Finally, it was a treat to watch a goldcrest hunting for insects on nearby branches.

Wren, robin and long tailed tit photographed in the park by DKG

My morning was now complete. I had gotten my shutter therapy with a couple of pictures I was happy with and I’d been fortunate to see some nice wildlife. Thank you, Southwick Country Park.

When you are out walking, whether it’s in the Country Park or anywhere in the countryside, make an effort to stop and spend a few minutes just looking and listening, and you may be surprised at what you get to see.