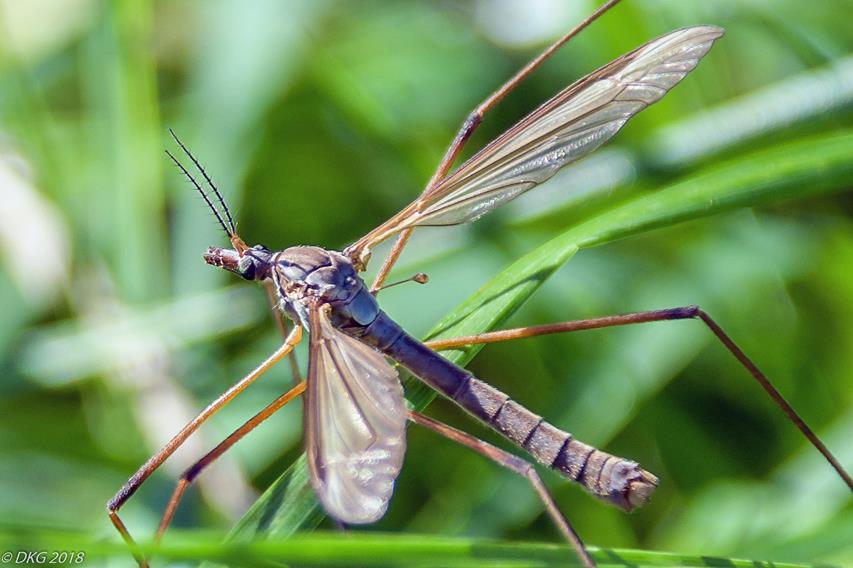 There are hundreds of species of crane fly in this country and almost all of them go by the name of daddy long legs. The differences between species can be microscopically small but we think this specimen, photographed in the park, is either a common European crane fly (Tipula paludosa) or a marsh crane fly (T. oleracea). On a day when the conditions are right for it, a species will hatch in thousands, climbing out of the ground and through the grass to take flight.

Crane flies are another of those species named for a brief adult life while the larval stage lives for much longer out of sight, in this case below ground. The adults live for only a few days; their purpose is to mate and lay eggs, after which they die. The larval stage, on the other hand, can last for years.

Crane flies serve several important roles in an ecosystem. Their brief adult life lifts nutrients, in particular proteins, out of the ground and into an environment where other species can access them; they become a source of food for birds, mice, frogs and spiders and other insects. The swallows and house martins swooping low over the park’s fields this week are catching crane flies, high protein fuel for the upcoming migration.

In the soil, crane fly larvae are detritus-feeders, living on and breaking down the organic matter that falls to the ground. They release nutrients back into the soil and create micro environments for other invertebrates. The larvae, known to gardeners and farmers as leatherjackets, also feed on the roots of plants; a farmer sees a failing crop, a gardener a damaged lawn but an ecologist sees clearings in which other plant species can germinate.

Some people are frightened of crane flies; their dangling legs and erratic flight feed into all sorts of phobias.  They are a harmless species, though; they don’t bite and what looks like a stinger is just an ovipositor. We should learn to love them for their essential ecological role.

Photographs of adult crane flies by DKG; others as attributed.