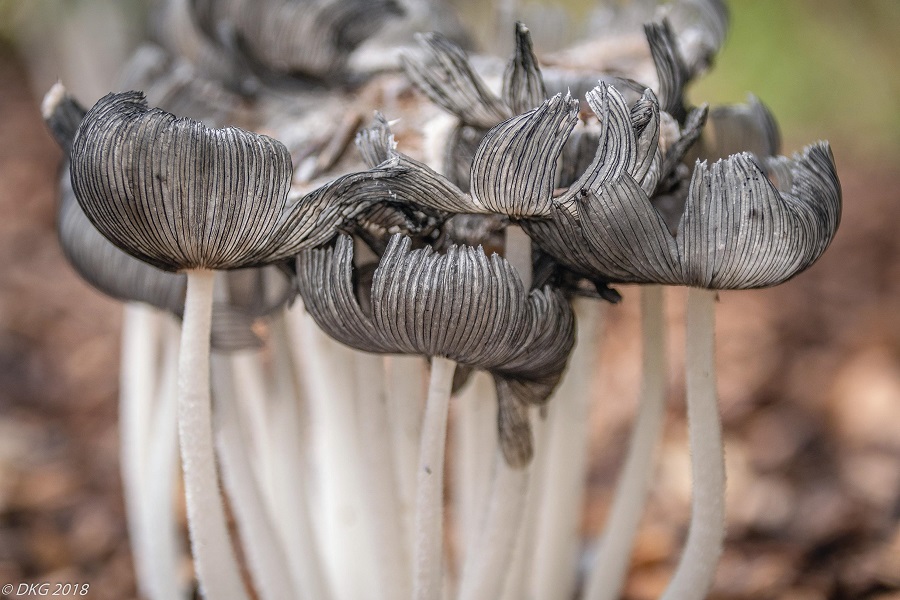 Inkcaps are a group of fungi with gills that liquefy as they mature and drip an inky black liquid that, in the past, was frequently used to make ink.

All inkcaps were once believed to be related, belonging to the genus Coprinus, but recent DNA analysis has shown that to be wrong and inkcaps  are now distributed between four genera: Coprinus, Parasola, Coprinopsis, and Coprinellus.

We think these are Coprinellus callinus or C. impatiens; they do not have a common name. They were found growing on rotting wood chips that had been used to make the paths through the trees

All Coprinellus species are saprobic which means that they grow on rotting plant material, particularly the dung of grazing animals, and they are short lived, sometimes liquefying into black goo within just a few hours of their emergence. Some species are edible but you have to be quick because the liquefying process can begin within a hour of collection and the chemistry of the black goo is not so reliable as that of the freshly picked mushroom. Some, though, are poisonous, particularly when combined with alcohol.

Fungi are only distantly related to plants. They are more closely related to animals but are substantially different from either group. In our categories we had divided the living world into Flora and Fauna; we now know that was wrong and have added Fungi.

There are probably more species of fungi in the park than there are of flora and fauna put together. Fungi, though are secretive, spending most of their year out of sight. Autumn is the time that they produce their strangely beautiful fruiting bodies to disperse their spores.