For the last two years, a pair of blue tits has nested in a hole in an oak tree in one of the  copses at the southern end of the park. There, they successfully raised broods of chicks under the watchful eye of DKG’s camera.

Oak trees are a favourite haunt of nesting blue tits. For preference they feed their young on the caterpillars of winter moths that lay their eggs in oak trees. They will hunt caterpillars in other species of tree within their territory, particularly if the caterpillar hatch is sparse or the oak trees, as they are this year, are late coming into leaf. 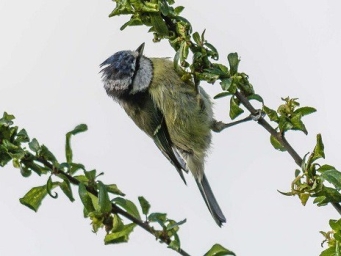 The birds seem to be able to time the hatching of their eggs to coincide with the hatching of the moths’ eggs. This mechanism is not well understood, but it appears there are variables in bluetits’ nesting behaviour that they can use to match local conditions that affect the caterpillar hatch. They can, for instance, vary the time from the laying of their first egg until incubation begins, the size of their clutch, and the intensity at which they incubate.

This year, spring was late and the oak trees came into leaf even later than that; the blue tits delayed looking for nest sites. The nest hole in the copse looked deserted. It wasn’t until the first week in May that the female bird was seen taking nesting material into the hole while the male was guarding their territory against thieves and invaders. 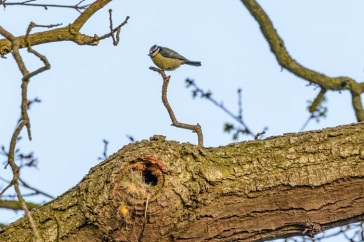 If the hen bird is sitting, there may be chicks quite soon; incubation time, another variable, is around two weeks. We’ll try to keep you informed.