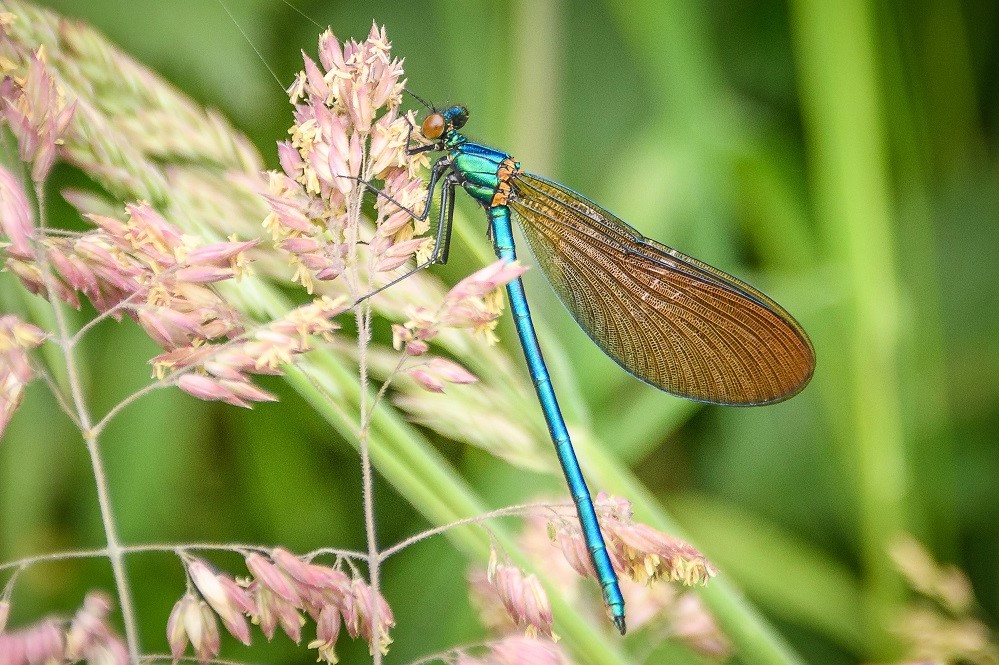 This is a damsel fly: a beautiful demoiselle (Calopteryx virgo), another species indicating  the unpolluted quality of the water courses in Southwick Country Park .

This is an immature male, it has the iridescent blue body of the mature male but not yet its dark blue-black wings, which develop over the first ten days of its life. If you look closely,  you can see the blue colouration beginning on the upper edge of the wings.

The female also has brown wings but with a distinctive white spot; her body is iridescent green and the tip of her abdomen is bronze.

These lovely creatures, which rarely live as long as fifty days, are the end-stage of a complex underwater existence that began two years ago. Calopteryx virgo lives the greater part of its life as a larva or nymph; a fearsome predator among the roots of aquatic and  marginal plants in stream beds.

We seem to name a species for its adult form, even if that adult’s life is no more than a single day. If we named this species for the years it spends as a nymph rather than the few days it spends as an adult, we would call it the fanged riverbed stalker.

Over two years it develops through a dozen larval stages, each ending with a moult, each moult revealing more and more adult-stage features. Before its final moult, the nymph will leave the water and climb through the vegetation into bushes or even trees, where its skin splits and  the adult finally emerges. The newly hatched adult does not move far until it has matured so we can assume that this one spent its larval stages in the park’s streams.

It is locally common but depends on good quality water. It is what is known as a bioindicator species: a species that gives us an idea of the health of a whole ecosystem. This immature male’s presence in our park tells us we are getting things right.